The bronzing of a standard cylindrical surface, the key to making a gilded upper stencil is to determine the arc radius of the stencil on the bronzing.
For example, a cylindrical workpiece with a radius of 20 mm is to be stamped on its outer surface with a flat stamping hot stamping machine.
The bronzing version uses an aluminum base plate and its thickness is:
Î”1=2mm
The thickness of the silicone rubber layer is:
Î”2=3mm
The relationship between the radius R of the aluminum mold and the work radius R workpiece and Î´1, Î´2 is:
R = R workpiece + Î´1 + Î´2 = 25 (mm)
The processing step of the bronzing on the stencil is as follows: firstly, an aluminum mold having a shape as shown in FIG. 1 is machined on the milling machine, and then the silicone rubber plate is pressed on the concave surface with an epoxy resin adhesive or a high-temperature adhesive tape.
The silicone rubber layer is elastic, and it will wrinkle after being pressed into the concave surface. It can be polished with fine sandpaper.
In fact, when a bronzing plate with a length of 40 mm and a total thickness of 5 mm is pressed into the concave surface of the upper stencil, the inner edge is compressed, which is a direct cause of wrinkles.

A teapot is a vessel used for steeping tea leaves or an herbal mix in boiling or near-boiling water, and for serving the resulting infusion which is called tea. Dry tea is available either in tea bags or as loose tea, in which case a tea infuser or tea strainer may be of some assistance, either to hold the leaves as they steep or to catch the leaves inside the teapot when the tea is poured. Teapots usually have an opening with a lid at their top, where the dry tea and hot water are added, a handle for holding by hand and a spout through which the tea is served. Some teapots have a strainer built-in on the inner edge of the spout. A small air hole in the lid is often created to stop the spout from dripping and splashing when tea is poured. In modern times, a thermal cover called a tea cosy may be used to enhance the steeping process or to prevent the contents of the teapot from cooling too rapidly. 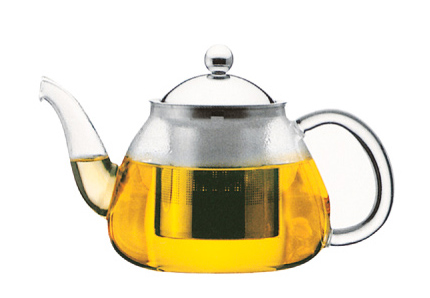